To my friends and family,

First of all, thank you so much for your support during the last year and a half as we all faced challenges staying in touch and remaining healthy combating COVID. My heart goes out to everyone who lost a close one or struggled fighting the virus themselves.

Many of you have asked about my health considering my at risk status as someone with a compromised respiratory system. Fortunately, I am able to say that I remain healthy. I thank my caregivers for masking procedures and social distancing when necessary for helping reduce my risk of infection. I have also received the vaccine without experiencing any complications or side effects. As with any of you, I was forced to curtail many of the activities that I had become accustomed to doing. However, now that things have started to open up, and more opportunities present themselves to do more activities, I realize that we are not completely out of the woods from fighting the pandemic.

Although it has been a challenging year, it has also been eventful. My brother Chris and his wife Lindsey welcomed my nephew, Logan, into the world in January. I have been able to meet him and see my nephews Joseph and William, as well as my brother JP and my sister-in-law Olivia. It has been a pleasure to see these three Neary boys grow. We have been able to stay in touch thanks to video chat.

So far this summer, I have had the opportunity to attend some Phillies games and enjoy dining at local restaurants. I welcome the chance to do more of these and other outings while the warm weather is here. Whether it be a local park or the deck at my house, maybe we can grab a sandwich and meet outdoors or utilize the grill here at the house.

I am hoping to see as many of you as I can over these coming months. Feel free to give me a call or shoot me a text message to set up a time to hang out.

Thank you everyone who participated in yesterday’s Let’s Throw Some FOKN Hatchets! Hopefully not too many of you are sore today. We had a great time seeing old friends and meeting new ones too. From the Neary Family and Friends reunion in the lower arenas, Chopper’s Hatchet House regulars who signed up, and the mini-commercial office party in the upper arenas, it was a lot of fun. Hearing the random loud cheers coming from nine arenas was really great.
We are extremely grateful for all the work that Dan Dvorak did to organize the event. We hope that his daughter, Jenna, had a great birthday!
As we highlighted yesterday, we wanted to send a special thank you to Leon Ariyan, Kevin’s former employer from some 14 years ago who paid the  $2,000 event balance. A thank you as well to our event sponsors:
FOKN Kick Axe Sponsors
Lane Sponsors
And of course thank you to all of you who registered, participated, and made a Chance Basket or general donation. We had 108 attendees, 18 teams, 92 players and collectively, who combined to raise $9,500.00 for Kevin’s ongoing care. 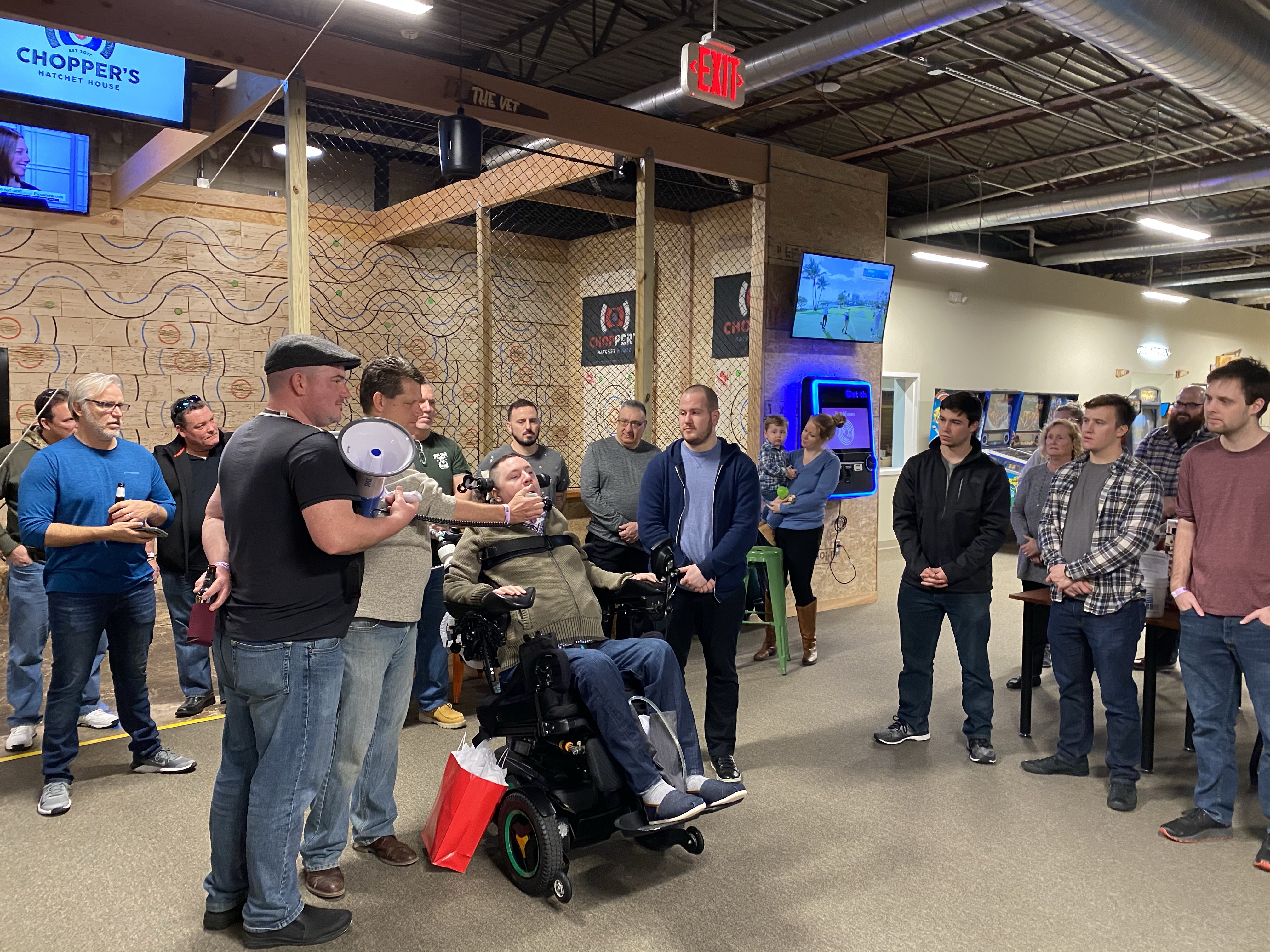 Hello to all and happy new year!

Most of you are aware of our upcoming event, axe throwing, scheduled for this upcoming Saturday, January 11. There is good news – there are still team and individual openings in the event you are looking to participate! A special thank you goes to Daniel Dvorak for all he has done to organize, promote, and execute the event.

As mentioned, there is still an opportunity for you to participate in multiple ways. You can sign up, sponsor, or feel free to donate a door prize. For those of you who utilize social media, please consider sharing the event with your friends and family.

Also, for those who have already registered, this is a reminder that you need to sign the waiver in order to participate. Please let me know if you need additional information.

Thanks again for your interest in our upcoming event and the various ways you continue to assist me. Everything is greatly appreciated.

Please note that you need to be registered to participate in the event.

Happy Thanksgiving! We wanted to extend our family’s thanks to all of you for your ongoing cheer and support.

As we enter the holiday season in earnest, an easy gift suggestion…no wrapping needed!

Consider joining the fun on January 11, at FOKN Hatchets!

You can register at the link below. Many have expressed their interest in attending. Now is the time to sign up!

Our thanks to Dan Dvorak for all of his work putting this great event together.

All good wishes for a happy and healthy holiday season!

Tickets are on sale for the FOKN Hatchet Throwing Event!

Also, mark your calendars for next year’s FOKN golf outing! The tournament will be on Sept 14th, 2020.

Lots of great ways to support Kevin coming up! We hope to see you there!

Please join us for our first fundraising event in 2020 as we ring in the new year with a fun event hosted by Friends of Kevin Neary!

On January 11, 2020, from 11:00 – 2:30, we will be headed to Chopper’s Hatchet House – Axe Throwing in Cherry Hill, NJ. Those who have thrown before already know it’s a fun time. If you have not tried it yet, what better way to get your first experience and help raise funds for helping with Kevin’s care? Chopper’s HH is great venue with 13,000 SF and 12 throwing lanes with 2 targets in each lane.

Registration will be opening shortly. Single player registration will be $60 and team and sponsorship levels from $300 – $1,000. Interested in helping? Please contact Dan Dvorak at DJDVORAK@HOTMAIL.COM or Kevin Neary  at NEARYK@GMAIL.COM if you can help with the following:

The proceeds will go to help provide for Kevin’s care. Please note that contributions to the Kevin Neary Trust are not tax deductible.

Thank you for following Kevin! Please look out for registration opening soon and start reaching out to your family and friends to get a team together.

Some of you may have seen Kevin on the big screen at Citizens Park last Friday with Chase Utley and Rob McElhenney from It’s Always Sunny in Philadelphia. We wanted to share the backstory. And, most importantly, Kevin wanted to thank his friend Rob for arranging a really special day. Read on to hear the story.

On Friday, June 21st, the Philadelphia Phillies held a retirement ceremony for Chase Utley, one of its most popular players in its long history. In front of family, friends, and a sellout crowd of fans, Utley delivered a well-received address to those gathered at Citizens Bank Park where he played the majority of his professional career. As part of the pregame ceremony, Utley threw out the ceremonial first pitch to his friend Rob McElhenney, star and creator of It’s Always Sunny in Philadelphia, fulfilling the character Mac’s dream of having a catch with the Philadelphia Phillies star.

One of those in attendance was Kevin – thanks to Rob. Soon after Kevin’s injury, he  became connected with Rob. He developed a friendship with the TV star that, despite the geographical difference between Philadelphia and Los Angeles, would stay intact through text message and the occasional visit while filming in the city of Philadelphia.

Months before Utley’s retirement ceremony last Friday evening, in one of this text conversations, Rob asked Kevin if he wanted to catch a baseball game when he was going to be in town. Kevin gladly accepted. Rob facilitated the process of acquiring tickets and situated Kevin in a Hall of Fame level suite next to his and Chase Utley’s. Later on that evening, the two of them connected and Kevin was introduced to the evening’s honoree. The three of them had the opportunity to converse and Kevin was presented with the baseball used for the first pitch which Utley delivered to Rob earlier that evening. During the conversation, the three of them appeared on the Jumbotron where the entire crowd could see.

In addition to texting back and forth and maintaining his relationship with Kevin, McElhenney continuously donated It’s Always Sunny themed items towards the charitable events designed to offset the cost of Kevin’s medical care. The evening of June 21st provided Rob and Kevin the opportunity to get together in a more casual setting to share in Kevin’s favorite sport and their mutual favorite team. When Rob entered the suite he situated Kevin in, he brought his friend Chase Utley to introduce the star to Kevin. He and Utley presented Kevin with the ball that was used as the ceremonial first pitch, autographed by the two of them.

Kaitlin Olson, costar in the series and Rob’s wife, was also in attendance.

Kevin has been ”honored and humbled” by the friendship that McElhenney has shown him since the two of them have become friends over the last 7 ½ years. When asked about the relationship, Kevin states, “Rob has amazed me with his ability to bring joy to my life and make me feel like a valued friend. Never would I have thought that I would be able to text a message to a busy television star and receive a message back within a few minutes.”

We want to thank Rob and Chase for their kindness and hospitality. It was a night Kevin will never forget. 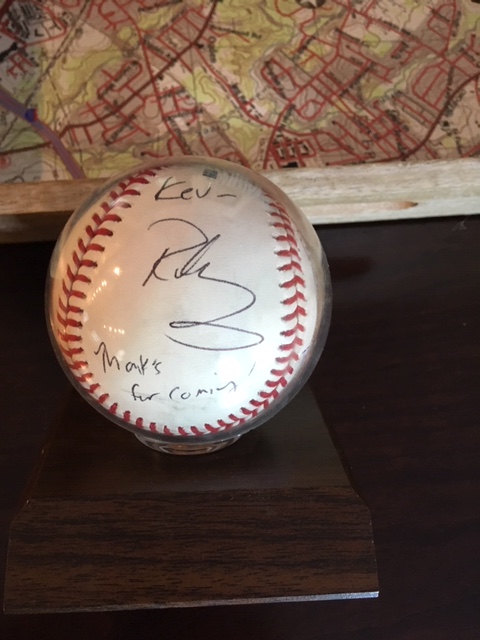 A note of thanks to everyone who helped make the recent bingo fundraiser held in Upper Chichester’s fieldhouse on March 2nd an overwhelming success, raising over $15,000 for Kevin’s care! Well over 250 people attended the event, and the combination of bingo, raffles, and 50/50 drawing all contributed to the total raised. A great evening was capped by a 50/50 drawing where the winner’s share was over $1,300.00. Kevin and our family are incredibly fortunate to have so many who continue to support us, and we are thankful for the support of everyone who assisted, attended, or in anyway contributed to the evening.

Of course, the most gratitude goes to the people that coordinated the event, Joan Morrison and her crew of volunteers who set up tables, ran the kitchen, shopped for the prizes, solicited donations, called the games, checked the winner’s cards, and all the other details that made the evening run so smoothly. The sheer number of local businesses that contributed and old friends who did likewise was truly gratifying.

Thanks to all who had a hand in making the evening so enjoyable and successful, and thanks to all from Kevin for attending and and stopping by to say hello.

We wanted to share a great event that will be hosted by Friend of Kevin Neary, in conjunction with Upper Chichester Recreation, for Kevin’s benefit.

The proceeds from this year’s Upper Chi Designer Bag Bingo on Saturday, March 2nd will go to help provide for Kevin’s care.

The event will be held at the Upper Chi Rec Center. Click here for more information  and details on how you can get tickets.

Please not the contributions to the Kevin Neary Trust are not tax deductible.

This is just a friendly reminder that our first online auction ends this Friday at 2 p.m.

We’ve got some great items still available that are steals. And the funds go to a great cause – they will go a long way toward getting Kevin the care he needs to lead a productive, positive, and healthy life.

Been thinking about making a bid? Now’s the time to get in on the action.

Please share with friends and family! The link to the auction can be found below.